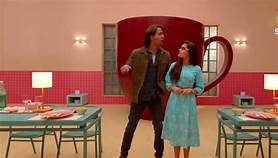 The upcoming episode of Star Plus popular daily soap Yeh Rishtey Hain Pyaar Ke is up for high voltage drama.

Abeer knows very well as what all had happened with Kunal in past and how he had dealt with it.

Abeer thus makes a plan of bhang for Kunal so that he may stay out of any trouble of past and also give some more trouble to Meenakshi.

Meenakshi will fume seeing what all is happening and how things are changing against her and knows that Abeer is bbehind all this.

What more dhamka to unfold up next in Abeer, Kunal, Meenakshi's life.

Stay tuned for more exciting updates of the upcoming episodes only on serialviews.com